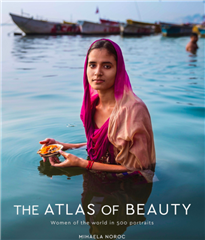 Book Review: A Celebration of Beauty

What makes a woman beautiful?

In the workout room of my college dorm, colorful letters plastered on the wall spelled out one answer: “You are beautiful if you are confident.” The phrase was meant to be motivational, but it also begged the question: What happens when I’m not feeling confident?
Mihaela Noroc’s The Atlas of Beauty: Women of the World in 500 Portraits, sends a more encouraging message: You are beautiful no matter what.
It might sound simplistic, even obvious, but sadly it’s overlooked in a culture that upholds “beauty” as a narrow (and often unrealistic) set of looks and accomplishments, which pressure girls to mold themselves into a standard in order to be admired. Our daughters deserve a more holistic vision of beauty, one that celebrates their uniqueness inside and out. Noroc’s book channels that vision.
Through a series of breathtaking shots and stories in this coffee table hardback, Noroc shows that beauty means authenticity, and that women everywhere embody it.
The book presents a wide variety of women, spanning a range of ages, ethnicities, economic levels, occupations, and religions. Noroc photographed all of these women exactly as she met them, using natural lighting and whatever setting surrounded them. We see a Mongolian woman milking a bison, a Portuguese mother pushing a stroller to the tailor, and a South African woman selling meat on a roadside. Some pose boldly, while others offer a shy smile. Regardless, each one makes a mesmerizing portrait. These images remind us that beauty dwells in ordinary, everyday moments, and that it appears in every shape, size, and color.
Alongside this variety runs a theme of unity: Noroc arranges several photos to draw parallels among women in different countries. We meet mother-daughter pairs, sisters, students, and refugees from opposite ends of the globe. The blend of difference and likeness highlights the splendor of each woman both from her uniqueness and her connection to the human family.
Because Noroc’s project presents people of all kinds, readers will probably disagree with the interests, beliefs, or lifestyles of some of them. But meeting each one’s gaze facing the camera, we can’t help but see another human person, who is both one of a kind and like ourselves. As a result, this book proclaims hope rather than relativism. It shows that we can find beauty in anyone, including those with whom we disagree.
Fr. Ron Gillis, who served as Oakcrest’s chaplain for almost 40 years, often said in his homilies, “There will never be another you!” With these words, he told each girl that she is beautiful because she is unrepeatable, and that she can love everyone around her because they are likewise beautiful.
The Atlas of Beauty celebrates the truth of those words.