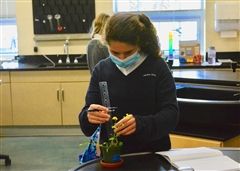 Every fall my physics students learn how to analyze motion up and down an inclined plane. On the one hand, it seems very basic—almost boring. Doesn't this happen every day all around us? On the other hand, it is one of the most mathematically complex and intimidating problems in introductory physics. And yet, it is beautiful.
With proper attention to detail and application of tried-and-true problem-solving strategies (and grit!) the mental quagmire is eventually whittled down into an elegant expression of only two mathematical variables. It is stunning in its simplicity.

Science pursues the everyday world and discovers that nothing is truly mundane.

And I believe it inspires wonder in three different ways.

First, this kind of scientific analysis demands more than rote memorization of facts and figures. It requires a thoughtful observation of the physical world and a tenacious step-by-step application of logical reasoning to arrive at a conclusion. What students discover throughout this process is more than scientific knowledge—it is knowledge of themselves, specifically an awe at a God-given ability that was once unimaginable. The complex and intimidating is now a cause for wonder. My brain can do this? It can, because God made it so.

Second, the discovery that the complex and intimidating can be restated in elegant simplicity is another cause for wonder. Creation is beautifully ordered and truth is coherent. It may be mysterious, but it is not arbitrary or contradictory. What eludes us now is an invitation to discover more. God is infinite, and He will never disappoint the intellects that He made.

Finally, science is wonderful because it speaks to us of a great truth: if God takes so much care in ordering the universe, would He not tend to us with even greater care? As scientists aim to "replicate" their studies, are they not confirming the great truth that Creation—and indeed the Creator Himself—is ultimately reliable?

The Gospel of Matthew tells us, "Look at the birds of the air; they neither sow nor reap nor gather into barns, and yet your heavenly Father feeds them. Are you not of more value than they?" (Mt. 6:26). I believe the physicist's corollary to this would be, "Look at a ball as it rolls down the hill. Are not you, a child of God, more wonderful than it?"

Oh! That men indeed were wise,
And would raise their purblind eyes
To the opening mysteries
Scattered them around ever.
Truth should spring from fertile ground,
Beauty beam from all around,
Right should then at last be found
Joining what none may sever.1
- James Clerk Maxwell, famous for unifying electricity and magnetism

Mrs. Kanuch spent eight years on active duty in the United States Marine Corps before joining the Oakcrest faculty in 2018. She graduated from the United States Naval Academy in Annapolis, Maryland with a B.S. in Physics, a B.S. in English, and a minor in Russian language and literature. She has extensive overseas experience, including deployments to Afghanistan, Iraq, and Bahrain and a study abroad program in Russia, and has worked directly with multiple federal agencies and senior-level Department of Defense and Department of State officials throughout her military career. She received her M.S. in Strategic Intelligence from the National Intelligence University and studied Latin through a summer program at The Catholic University of America. Mrs. Kanuch is supremely grateful to be a part of the Oakcrest family and loves sharing her passion for learning and service with her students.