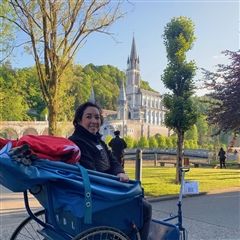 Each year, millions of pilgrims seek physical and spiritual healing at Lourdes, France, the site of the Blessed Virgin Mary’s apparitions to Bernadette Soubirous in 1858. This spring, Oakcrest alumna Lia Ridout (‘85) joined that number as she went on the Order of Malta’s annual Lourdes pilgrimage.
The Order of Malta, a religious Order devoted to the care of the poor and the sick, leads groups of sick and disabled pilgrims of all ages (known as Malades) from around the world to Lourdes each May. The Order’s goal is to serve each Malade and to support him or her with emotional, spiritual, and, on occasion, miraculous physical healing.
When Lia, an active and fit non-smoker, first received a diagnosis of inoperable lung cancer in December 2017, she knew about this pilgrimage but had no plans to go. After undergoing treatment in the spring of 2018, however, Lia heard from Oakcrest Director of Parent Support Terri Collins. Terri told her that Dr. Molly Klote, mother of Meredith (‘22), was involved with the pilgrimage. Dr. Klote is a Dame of the Order of Malta and as such, sponsorspeople to travel as Malades on the Lourdes pilgrimage. Lia got in touch with her, and Dr. Klote ended up sponsoring Lia. Everyone who is sponsored is interviewed and has her medical file reviewed by a group of Dames and Knights who are primarily medical professionals. Lia was accepted for the 2019 May pilgrimage, and so it was that one spring day, she and her husband Louis sat in a plane with other American pilgrims, flying across the Atlantic to France.
The pilgrimage lasted a week, and was full of many powerful moments for Lia and her fellow Malades, from daily Mass to Eucharistic adoration, and the famous Lourdes candlelit evening Rosary procession, which Lia describes as “really amazing.” The pilgrims visited St. Bernadette’s childhood home and prayed an outdoor Stations of the Cross, which Lia found particularly moving. At each station, the priest leading the devotion made direct parallels between the suffering Christ and the pilgrims.
The centerpiece of the trip, however, was visiting Lourdes’ famous Baths. The Baths are filled with water from a spring which appeared during Mary’s apparitions to Bernadette. This water is famous for its miraculous healing power. When Lia approached the Baths that spring day, she desired first and foremost the grace of fearless acceptance of whatever God had in mind for her future. She says, “We all want physical healing, but that’s not what we’re here for. Healing can come in so many different forms.” And spiritual healing was what she found that day. “That was for me the most powerful experience because as soon as I walked in, this wave of emotion just came over me,” she says. “I had this feeling of just being in the presence of Our Lady—that’s when I felt I could completely surrender.”
Lia experienced a deepening of her relationships, whether it was with Mary, her fellow pilgrims, or the members of the Order who cared for her on the trip. While she’s always had a strong devotion to Our Lady, she says this pilgrimage made Christ’s mother more present to her than ever before. When you’re in the grotto where Bernadette had her apparitions, she says, “There’s no other place on earth where you can feel closer to Mary.” She felt deeply humbled by the kindness of the Order, whose members completely dedicate themselves to serving the Malades. Lia admits that it took a while to get used to letting herself be served by Malta volunteers. But their presence and assistance was ultimately a great gift. She also loved getting to know the other pilgrims in her group.
For anyone planning a pilgrimage to Lourdes, Lia advises, “Be prepared to be transformed and savor every moment while you’re there.” She herself hopes to return to Lourdes. Until she can go back, though, Lia treasures the gifts she received from this trip. She is still in treatment, taking pills every day to keep the cancer at bay and make it possible for her to live a fairly normal life. And she is grateful for the prayers of her family, friends, and the Oakcrest community, and asks that they continue to pray for her and her family.
Lia traversed thousands of miles over land and water to find peace and the grace to surrender. At Lourdes, she found it. “No matter the outcome,” she says,  “I can accept that and not be afraid.”
Back