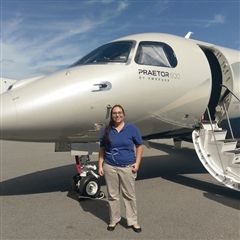 JJ Myers (‘09) first decided she loved space when she was ten years old. That passion never faded and now years later J.J. is living the dream, working as an aerospace engineer for the world’s third-largest commercial jets manufacturer.
After graduating from Oakcrest, JJ attended Embry-Riddle Aeronautical University. She studied Aerospace Engineering with a concentration in Astronautics, which focuses on the science of the construction and operation of vehicles for travel in space beyond the earth’s atmosphere. During her college years, she got the chance to intern in the Munitions and Weapons Department of Yuma Proving Ground, one of the largest military installations in the world. Although her work there had to do with mortar testing and not aircraft specifically, JJ was able to adapt to the position well because of the versatility of her major. In her last semester of university, JJ attended an Embry-Riddle career fair and discovered Embraer, a Brazil-based company that produces commercial, military, executive and agricultural aircraft. JJ was hooked. She applied, was hired in 2015, and has been there ever since.
Today, JJ  works in the Aftermarket Modifications Department of Embraer’s executive jets program. She’s on the mechanical design team, which installs, tests, and certifies new systems on aircraft. The team, which usually focuses on one or two projects at a time, breaks down the system, determines what equipment is required, and then figures out how to mount it on to the aircraft without failing any of the FAA’s safety criteria. On a typical day, JJ will spend most of her time designing bracketry and supports for a new system. Or she’ll help with writing certification reports that are delivered as part of the engineering package. JJ enjoys the challenges of her work. “I really do love the design aspect,” she says. “Aircraft are pretty packed in when it comes to equipment, so you get a real sense of accomplishment when you find a location or a solution for a new piece of equipment.”
JJ credits Oakcrest with giving her great mentors who helped prepare her for success in post-graduate life. For Oakcrest students interested in pursuing a career in STEM, she advises, “Learn to write clearly and effectively.  Technical reports are a major part of STEM.  Also, your first year will be hard.  The courses are designed to weed out students who don’t have the commitment to follow through. If you know the field you want to study, stay up to date on the news in that field.  When it is time to write a report, you will know what interests you enough to write about. Learn to study/practice effectively.  STEM is often about how well you can learn.”
Back