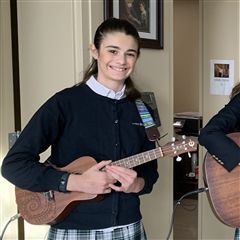 Ana Sofia ('25) chose to come to Oakcrest for sixth grade after she visited and experienced the warmth of the school community.

"When I shadowed, the students and the teachers were so nice and welcoming," she shared in a recent interview. Now an eighth grader, Ana Sofia enjoys her classes and the many extracurricular activities she's involved in at Oakcrest. During a typical school day, she goes to her classes, which include Physical Science, Literature and Language Arts, Algebra I, Theatre Arts, Spanish, and Catholic Doctrine, with plenty of time in between classes for talking with friends and spending time with God in Mass during Enrichment.

She notes that the most memorable class she's taken so far has been history—she loves hearing stories of courageous people who helped create the world we live in today. After the school day officially ends, Ana Sofia heads off to after-school activities. In the fall, she acted in the Middle School theatre production. "I love spending time with the cast of the play, and performing for the audience what we have been rehearsing for the past couple of months," she explains. She also plays basketball, and in the spring hopes to join the lacrosse team.

Music is also a big part of Ana Sofia's life. She plays the ukulele, piano and guitar, and loves writing and singing her own original songs. Last year, when Oakcrest's Concert Chorus teamed up with Smithsonian Folkways Records for a project celebrating American folk music, Ana Sofia sang and played ukulele for the video that they produced. This fall, she submitted an original song, "Let's Go to the Moon," to the NAfME (National Association for Music Education) Student Songwriters Competition and received excellent feedback. "I enjoyed your chorus," one of the judges wrote. "The upbeat rhythm and overall sound made me want to go to the moon, it sounds like such a nice place! One of the important skills for a songwriter is developing an ear to write memorable melodies and lyrics. Your chorus does just that. The first four lines of the chorus, especially, work very well together and will be the part of the song that the listener will remember."

Of the many things she loves about Oakcrest, Ana Sofia treasures the people the most. "My favorite things about Oakcrest are the friendships and the teachers. At school, everyone is so open and you can be friends with anyone. The friendships are the kind of friendships that will last a lifetime. The teachers are so nice and inviting. They help you with whatever you need, and they will help you to succeed."
Back