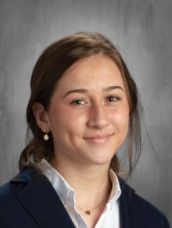 Even before she was old enough to attend Oakcrest, Mariana was an Oakie at heart.
When she was little, her parents discovered Oakcrest and moved from the West Coast so that Mariana would have the opportunity to attend Oakcrest. As an elementary school student, Mariana attended all of the Oakcrest Upper School shows and remembers how excited she was when she finally received her Oakcrest acceptance letter in the summer of 2016.
Four years later, she's still loving Oakcrest, now enjoying life as a sophomore. A typical day for her starts with a short visit to the chapel as soon as she arrives, first and second period classes, and then either Mass or Enrichment. She loves that she can choose between Mass and Enrichment, and splits her time between both. After more classes and lunch with friends, she ends her day with sports practice. Mariana's favorite class that she's taken so far has been eighth grade American History. "The teacher made me love history so much," she explains. "Learning about history became less of a burden and more of an interest."

She is active in school life outside of the classroom, playing tennis in the fall and lacrosse in the spring, and participating in many theatre productions. "I played lacrosse when I was younger but then I was disappointed when in sixth grade I found out that Oakcrest didn’t have a Middle School team," she says. So after working with her friends and the Athletics department, the team was launched. Mariana also loves theatre at Oakcrest. "Pursuing a career in theatre has always been my dream, but realistically I know that this is such a difficult industry," she says. "So instead I have participated in Oakcrest shows since sixth grade. Doing those productions is such an amazing experience. I've made friendships with girls of different grades and strengthened my talents."

When she's not at school, Mariana loves spending time with family and friends, listening to music, and painting. "The best thing about Oakcrest is the environment that is created by all the girls," she says. "The friendships that I have made at Oakcrest are incomparable to any other."
Back