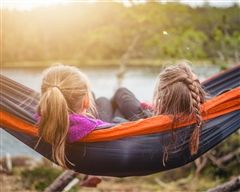 Meg Meeker's book Raising a Strong Daughter in a Toxic Culture: 11 Steps to Keep Her Happy, Healthy and Safe (Regnery Publishing, 2019) is a tidy little handbook for how to raise a daughter with character, confidence and resilience who is on a path to heaven—in eleven easy steps!
Well, perhaps not so easy, but the book is pleasurably clear and practical, and it features stories of girls from the author's medical practice to illustrate her points.

Not so easy because readers will examine their own parenting methods, which can be cringe-inducing in light of the author's professional, persuasive ideas, and see a need to amend their style. But what greater and more important cause?

Dr. Meg Meeker is a mother of four daughters and a pediatrician who has practiced more than thirty years. She reaches her conclusions based on vast experience with thousands of girls, but often backs her arguments with data and quotes from other healthcare experts.

To Meeker, the role of mom is "mentor, ally, glue." If your daughter bursts into tears because a friend is mean, for example, mother-as-mentor should encourage her to name her feelings—shame, belittlement, anger with herself or her friend? If she's furious that the friend was hurtful, mom can explain how retaliation in kind degrades her, that it's best to disregard the unkindness and to realize that her intrinsic worth is not a reflection of what her peers think of her. Understanding deep feelings and learning to master her reactions serves a girl beautifully for life, lending priceless self-confidence and freedom due to the ability to control her emotions, rather than the reverse.

Some mothers have volatile relationships with their daughters. These tend to fall into four types, according to the author: needy—believing they must be involved in every facet and activity of their daughters' lives, often causing codependency; controlling—bossy and dominating, causing daughters to doubt themselves and to lie so that they can tell mother what she wants to hear; distant—rarely showing affection, emotionally absent, leading the child to believe something is wrong with herself; and best-friend mothers who during high school years deprive a daughter of the authority figure who provides safety and good judgment, and perhaps humiliate her by employing youthful speech and fashions.

She gives hope to all types of mothers, however: "It is never too late to restore the bond between a mother and a daughter," she writes. "Asking for and receiving forgiveness is part of life."

Meeker sees the role of dad as "first love, protector, leader." I remember my dad denying me permission to go away with a group of friends to a lake house. They were a year older than I, obedient kids, top students, non-partiers. I was quite disappointed and annoyed! Later, gratitude and respect replaced those feelings when I heard what had gone on at the lake house. That's part of a dad's role, defender and example of assertiveness.

Helping daughters to take control of screens (as opposed to the other way around) is a prescient chapter. It begins with the case of an innocent movie-watching get-together gone wrong, thanks to publicity of the gathering by texting and sabotage by boys armed with alcohol. The clear correlation between social media and depression is made ever clearer—and acutely—with insights about sexting and its common result of premature sexual activity.

Girls' screen time is but half the problem however, insists Meeker. The other half? Parents' use of screens! "Kids want attention and a close relationship with their parents, but they often feel ignored by parents who apparently would rather text friends..." She writes of the dehumanization that can result if the family is not gathering around a table to eat, converse or play a game, but instead is scattering around the house and texting. Some of the solutions, like setting limits and putting out phone baskets, likely won't be new to readers, but she does offer suggestions of how to work with one's daughter. The bottom line is that parents have to tune out the loud protests, and remember the oft-forgotten fact that the kids are not in charge and usually don't know or care what's best for them.

She notes that many parents who want their daughters to resist peer pressure will say that they have to give their daughter a smartphone because everyone else has one. You don't! We didn't. Protect her instead from all the risks and depression-inducing activities that come with that device.

Meeker takes on "toxic feminism" for devaluing men and having "demolished the value of children"; its messages, she writes, decrease women's happiness and increase their loneliness. Instead, teach your daughter healthy feminism. Begin with God, the "original and most powerful feminist," who chose a woman to give birth to and nurture His Son, and who peopled the Bible with strong women and mighty female leaders. Teach her, Meeker writes, that she was created very purposefully by a loving God Who will provide guidance for discovering her true vocation.

There may be some surprises. Telling our daughters that they can achieve anything on which they set their hearts is a mistake, Meeker writes, since it ignores the fact that each of us is limited in our talents. The sublime truth is that we're not limited in our ability to develop great character, however, and the best way for our daughters to benefit from their talents is by growing in virtues like courage, patience, tenacity, integrity and humility, and learning to serve others rather than continuously thinking of themselves.

As the mother of a pair of on-track mid-twenties daughters and also a teenaged one, I recommend this book. It's written for those hoping to raise physically and psychologically healthy young women in the belief that they have inestimable value in body, mind and spirit." The clarity it provides, and "the words," as well as the practical usefulness, mean it will be of real assistance to any reader.

Mary Elizabeth Naegele writes from Virginia, where she and her husband have raised eight children, including Caroline, Oakcrest Class of 2022. A writer with a background in editing, Mary Elizabeth focuses on family life and parenting.
Back