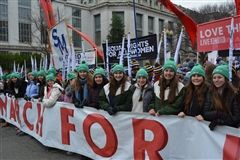 A Woman's Choice for Life, Morality and Justice

Mary T. Ortiz, Ph.D.
Keynote Address for A Woman's Choice
Advocates for Life Dinner
I am honored and grateful to have been invited to address you. Thank you for supporting the generous and needed work that A Woman's Choice does on behalf of mothers and children. We have been introduced in these last months to a distinction between essential and non-essential work; while this may apply to functions and tasks at a particular time, and even this is debatable, it can never apply to human life.
Every person is essential in that he or she is a unique, unrepeatable creation of God, whose life is sacred at every stage from conception to natural death. A Woman's Choice's dedication to mothers in crisis whose unborn children's lives are in jeopardy offers the greatest testimony to the value of every human life.

Your work repairs and rebuilds the culture of life when it is at its most fragile. My work in education attempts to lay strong foundations which sustain the culture of life. My first job after college was in a small independent school for girls outside of Boston. I have been the Head of Oakcrest School for eight years. From my first job until now, I have had the privilege of helping to educate young women to take up their responsibility to serve as trustees of humanity. This rich expression, trustees of humanity, is the key to understanding the connection between education and building the culture of life.

Saint John Paul II deeply understood the vocation of women in the contemporary world and he captured the essence of this vocation through the expression, trustees of humanity, which refers to the amazing truth that "God entrusts the human being to the woman in a special way." He wrote that the moral and spiritual strength of a woman comes from her understanding of this calling, of this responsibility. The secret of her moral force, we can infer, is her awareness that she is gifted by virtue of her feminine nature to give priority in every situation to persons. To women, then, is given the lion's share of the responsibility in making a culture truly person-centered, respectful of the dignity of each human being, and ultimately a culture of life. It is a very high calling, and upon its fulfillment depends so much.

Reading and pondering this myself many times, I have asked the question, what kind of education must we offer so that every young woman can bring this person-centered culture everywhere? Over the years, I have come to see that a young woman has to discover that she herself possesses a great dignity; she must be guided to discover her own beauty and depth, and this through her family first and foremost and then through a complementary education that guides her freedom through her adolescent years. An education that values strong personal relationships between students and teachers is well-suited to helping a young woman know her dignity. Through mentoring, she is shown how to take on the project of her own development. This highly personal, dynamic, integral education awakens an appreciation for the sacredness of human life and forms a young woman to be able to recognize, respect, and defend the sanctity of human life, beginning with her own life.

It is an education that is enlightened by faith in God and love for others as fellow children of God. It is rooted in simple, profound truths that are true for everyone, everywhere, of all times. From this, paradoxically, it becomes easy to appreciate the rich diversity of cultures and human traditions. Based on reason lifted up by grace, it gives a common ground from which to engage in meaningful conversation and to respect different opinions.

When I was a freshman in college last year, I had the privilege of encountering so many people from all different backgrounds. I quickly realized how heavily one's beliefs are shaped by where we come from. I learned to meet people where they were in order to understand them. My roommate, for example, was someone who had never even heard the pro-life stance before. We didn't have many things in common, but we were both open to listening and understanding each other. As the months went by, this led to conversations about our deepest convictions and values. Not only was I glad to share my thoughts on the dignity of human life with her, but I was thankful that we challenged each other's views in the most loving and open-minded way. Because our talks were rooted in friendship, it felt like we were seeking out the truth together.

A few weeks after I came home for the summer, I was unpacking my backpack and found a letter my roommate had tucked inside before I left. She expressed how grateful she was that we were randomly placed as roommates because she now sees how precious an unborn child is. In that moment, it became clear to me that every situation can be geared towards the good. We might never get a letter that lets us know how we impacted someone's life, but that doesn't mean hearts aren't changing. Even the smallest interactions can be used to bring light where it's needed.

Over the years I have heard many stories like this, dealing with all kinds of fundamental life issues. From growing in respect for one's parents and grandparents  to the reasons behind choices of clothing and entertainment that reflect one's dignity, young women who have received a person-centered education share simple and profound ways to humanize the world. This is the expansive work of true friendship. It is small, hidden, but more effective and long-lasting than slogans or campaigns, however necessary these are at times. Because people know they are cared for as friends, and that they will not be left alone, they are  prepared to receive well hard truths and make hard decisions to defend life, if and when these present themselves.

To close, like A Woman's Choice, our school has been trying to weather the storm of the pandemic. We began using the image of a lighthouse as a rallying symbol of hope back in March when we faced new and disconcerting challenges. In thinking about our work, I found that these words from a friend of mine, who is a grandfather of two of our students and a real lighthouse keeper, very expressive:

"These structures represent a safe harbor, good deeds and selfless service to humanity... The lighthouse, of course, has long been a potent metaphor for hope, selflessness, aid and comfort, and clear direction toward understanding and enlightenment. Those ideas have always lent lighthouses a mythical air. Yet, as any keeper will tell you, a lighthouse is anything but ethereal. As an owner and keeper myself, I know all too well that a lighthouse is a serious proposition, something real and solid upon which many lives depend."

Your work and the work of educating our young people is a serious proposition, and something real and solid upon which many lives depend.

Mary T. Ortiz holds a Ph.D. in English Literature from New York University, and B.A. degrees in both English and German from Bowdoin College. She has been dedicated to the education of young women for over 25 years and has been the Head of Oakcrest School since 2012.
Back